The development of the Facebook page over the last few weeks has been intense, starting as a public group with multiple admins to a sophisticated page where we can post as ‘Homefoto’.

Due to the lack of experience in this area we were unsure of what kind of Facebook page to set up. We first decided to create a group because it allowed more than one person to be an admin and this was useful due to the fact that the admin team could then all add to this group equally.

However, this was problematic when posting. If I posted to this page then it would have been displayed as ‘Georgia Hare posted in Homofoto’ rather than ‘Homefoto posted’. This looked less professional and went against the aim of the Facebook page. It also looked like the event itself wasn’t doing any work towards the event.

Instead of getting rid of the group entirely we decided to make it into a private page for only the members of the organisational team to have access to, and create an official page. This page is now called  Homefoto Digital Mash Up 2016. Within the page there is an official event set up which will remind anyone who is invited or who has responded about the event before it happens.

On this page we keep the people who have ‘liked’ the page up to date with what is going on behind the scenes, introducing them to the team, and showing them sneak peak pieces of work to keep them interested in what is happening. In getting them interested in the work that is on the page we are hoping that they will be interested enough to come along and see what other work and events are happening that day.

Keeping the display picture up to date with the current poster is important to me because it shows the ‘likers’ that we are making progress. It also shows that we are caring about the smaller details that people often forget, such as the cover photo being a different ratio to the profile picture. This is something that got pointed out to me by another member of the team and a poster was made shortly after, specifically for the Facebook cover.

This image soon got updated for this image:

This is taken from one of the designs for posters, so this image will soon be seen on notice boards etc.

As a group we had a Facebook group chat in which we would all communicate with each other about the project. As time went on and more specific working group emerged (marketing, exhibition, set dressing ect) we all broke up into smaller Facebook groups for that specific area. For example, as part of the marketing team I was in the marketing group chat and anything that needed to be discussed about marketing was said in that group chat. This is where we would decided when to meet, what we needed to do etc. It also allowed us to keep each other up to date with what we had achieved individually and allow clear direction in what needed to be completed

As well as keeping the Facebook page up to date with posters, we also make sure that we post written status’, so we can keep everyone up to date with more than just posters. This updates consisted off crowd funder updates, pictures that were submitted for the big screen and countdown to the event. 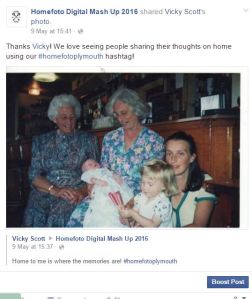 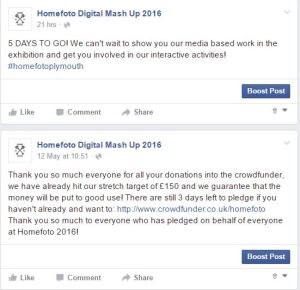 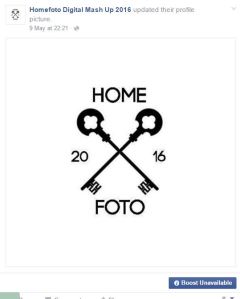 We have also created more social media platforms, including Twitter and Instagram. Kate volunteered to manage the Twitter and EJ took charge of the Instagram Page. The purpose of the these platforms was generally the same as the Facebook page. We wanted to advertise the event, but we also wanted to make sure that a different demographic is also aware of the event. This is where we bought in the Twitter and Instagram. Based on my own social media  usage, I use Facebook a lot less compared to the others, so for our age range demographic  we decided that Instagram and Twitter should be used as regularly as Facebook.